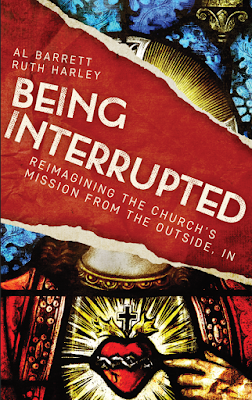 Using selected content from the book Being Interrupted: Re-imagining the Church’s Mission from the Outside, In (co-written by Al Barrett and Ruth Harley, to be published by SCM Press, 30 November 2020) as a starting point, these 6 sessions will seek to confront the multiple privileges, divisions and obliviousnesses that haunt both wider society and the church itself, and especially race, class, gender, and the marginalizing of children and the non-human world. We will tease out the ways in which these fault lines are reinforced by the ways in which we imagine, talk about, and practise ‘mission’ – and explore how they might be interrupted, disrupted and transformed.

The sessions will be introduced and facilitated by Al Barrett, Ruth Harley and Sharon Prentis, and also include contributions from special guests, opportunities for small group conversations in breakout groups, and a final plenary putting some questions and comments to the panel...

Keep an eye on the HeartEdge website - and their 'Living God's Future Now' Facebook page- to book your place in any of these conversations - or search Eventbrite for 'Being Interrupted'.

How to buy the book!

Being Interrupted: Re-imagining the Church's Mission from the Outside, In, by Al Barrett & Ruth Harley (with illustrations by Ally Barrett), is published by SCM Press on 30th November 2020. You can pre-order it from SCM Press here: https://scmpress.hymnsam.co.uk/books/9780334058625/being-interrupted

Posted by Revd Al Barrett at 09:43 No comments:

Revd Al Barrett
Firs & Bromford Estate, East Birmingham, West Midlands, United Kingdom
Since September 2010 I've been Anglican priest ('Vicar' to the rest of the world) for the parish of Hodge Hill, East Birmingham. Among other things, that means being 'present' around the place, making friends, listening lots, helping others reflect, and nurturing a church community that is committed to 'growing loving community with all our neighbours'. In 2017 I finished a PhD developing a 'radically receptive' political theology / missiology in the urban margins (now published as 'Interrupting the Church's Flow') and in 2020 I co-wrote 'Being Interrupted: Re-imagining the Church's Mission from the Outside, In' with Ruth Harley (SCM Press). I'm continuing to write, and also do bits of facilitating, speaking and listening in the wider world beyond Hodge Hill.