I was invited to present at a conference on 'A Future for Post-Industrial Communities?', organised by Hope Not Hate and the Leeds Centre for Employment Relations, Innovation and Change. It was a very thought-provoking and energising couple of days, with some very passionate and insightful presentations and conversations. Oddly, though, it seemed I was the only speaker from an explicitly 'faith community' perspective, and one of very few who both worked in and lived in the place they were talking about. This is what I said (with the slides I used with it): 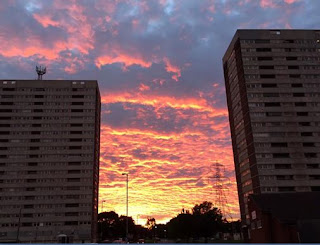 This is where I live and work: the Firs & Bromford, a 1950s & 60s outer estate, in east Birmingham, tower blocks and maisonettes, semis & terraces, and a rapidly-changing population, with growing Somali, Nigerian and eastern European communities, among others. 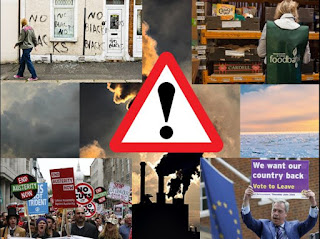 We’re facing urgent challenges (globally, nationally, locally):
Deepening austerity, poverty & inequality;
Deepening divisions, simmering racism that sometimes explodes;
and in the background to it all, a global environmental crisis, which will force more and more people to move en masse, and yet will also force us all to live more locally. 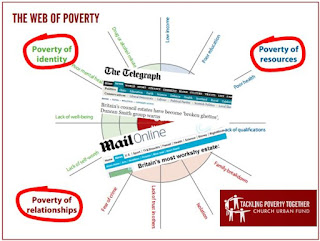 In neighbourhoods like mine, we don’t just receive an unjust sharing of resources... we've also witnessed over the years the crumbling of neighbourly relationships, and losses in our individual and collective sense of identity... often a result of internalising the negative messages of outsiders (politicians and media especially). 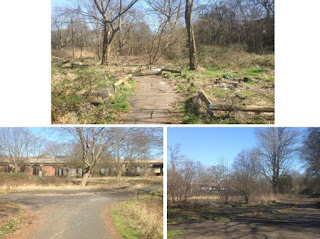 We call this ‘the wasteland’: one corner of the Bromford estate, on which the City Council built tower blocks in the ‘60s, which rapidly started sinking into the mud (who knew – it was a flood plain!)... they pulled them down in the ‘90s, and the wasteland has been abandoned ever since – even though many local people walk through it every day, on their way to school, or the shops... 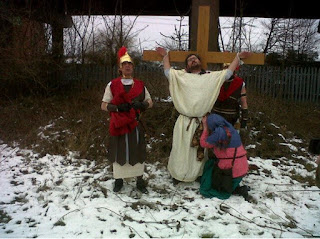 And it was in the wasteland, one wintry April afternoon, under the concrete pillars of the M6 motorway, that we crucified Jesus... in the first Bromford Community Passion Play. ‘My God, my God, why have you abandoned me?’ cried the dying man – and the echoes seemed to resonate with some of the deepest stories of our neighbourhood...

...and out of the silence that followed, these defiant words of Maya Angelou sang out: 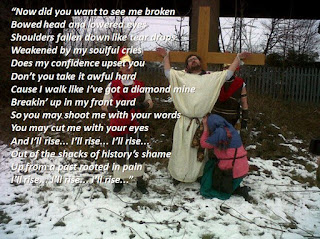 So, if there’s one question that guides our work locally more than any other, it’s this: 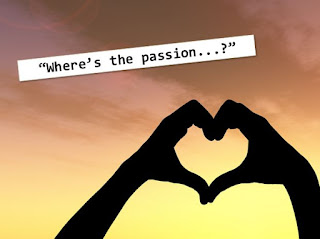 Passion can mean suffering, of course – where’s the pain? where does it hurt?
But it also means, what fires you up? what are the things that make you get up in the morning? what are your deepest loves? what brings you to life? 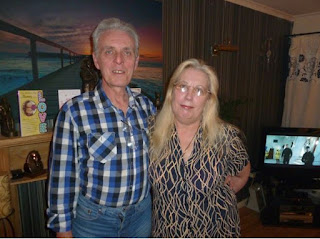 Phil & Flo are passionate about their neighbourhood, our neighbourhood. Flo’s lived on the Bromford for over 30 years, and if she issues orders, you jump to it. Phil’s joined Flo here more recently. He works in one of the few remaining local factories. But his real passion is theatre: putting on a performance, making people laugh. 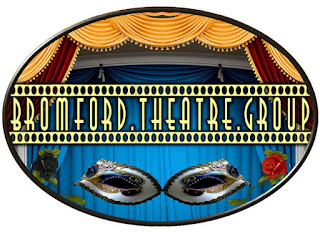 The Bromford Theatre Group was Phil’s baby. He started it from scratch. From Christmas pantos to Halloween ghost walks, from Mad Hatter’s Tea Parties to the Community Passion Play, the theatre group gets people involved, draws out their passions and gifts, gets them doing stuff they’d never dream of... builds community, and energises people for action. 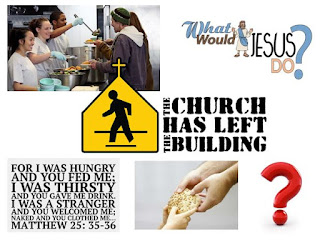 But what of the local church? That’s what you’d expect a vicar to be talking about, I’d guess. You might also expect me to talk about church initiatives in the community, church-run projects filling the gaps in service-provision where the state has retreated, caring for the vulnerable, feeding the hungry and welcoming the stranger, just like Jesus did... 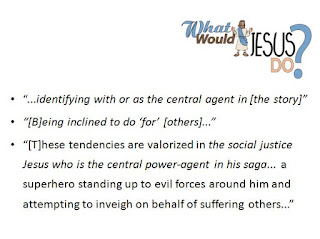 The trouble is, it’s actually quite easy to do that stuff. And it's really, really tempting. Being the central agent in the story, doing things ‘for’ others, standing up to the evil oppressors, following in the footsteps of the social justice superhero Jesus... 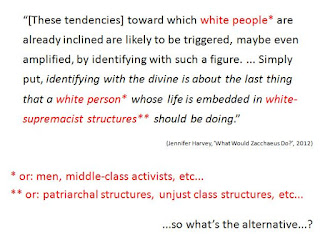 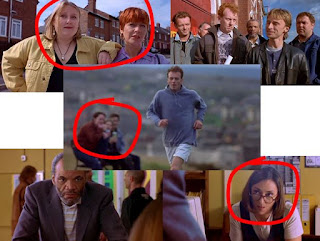 Well, how about finding inspiration in The Full Monty instead? Not identifying with the brave blokes who got their kit off, though. Identifying instead with the women-folk in the film who teased them, wolf-whistled them, raised an eyebrow to nudge them towards being the men they didn’t imagine they could be... 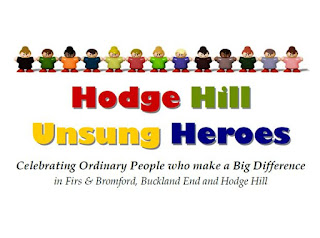 In Hodge Hill, with only slightly less sexual tension, we’ve searched out our local ‘unsung heroes’, those ordinary people who make a big difference in our neighbourhoods, in quiet, often hidden ways. Often people who lead from the middle, not from the front. People with passion, gifts and skills that they’re willing to share more widely with their neighbours. 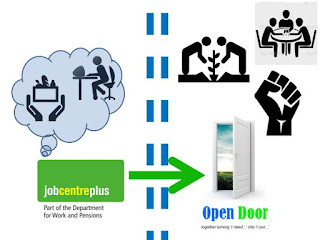 At our weekly Open Door drop-in, the DWP think we hand out food parcels and help people do their job searches. And we do. But it’s much more important to us that we share food together, unearth people’s passions together, dream and plot and grow new stuff together, and where we can, build solidarity to challenge the systems together... 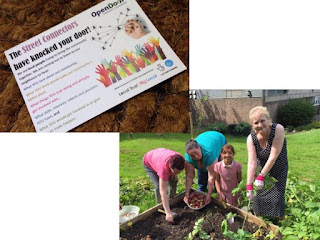 But people don’t often come to us without us first going to them. So our Street Connectors are out every week, knocking on doors, asking people what they’re passionate about... not asking them what they want us to do for them, but what we can do together to be the change we want to see... 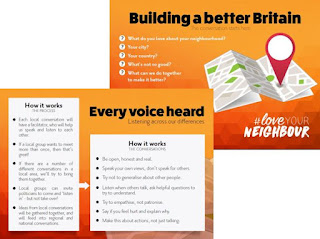 And most recently, we’ve started trying to bring together people for Community Conversations, across differences of age, ethnic background, class and politics, to share openly and honestly what we love and where we struggle with our neighbourhood, our city, our country, and what we can do together to make all 3 better. 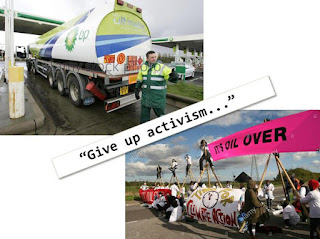 Geographer Paul Chatterton has written an article titled ‘“Give up activism”...’. He reflects on how environmental activists blockading an oil refinery unintentionally cast the petrol tanker drivers as their ‘others’, on the ‘opposing side’. Instead, he argues for giving up the moral high ground of ‘activism’, to ‘learn to walk with [our] others on uncommon ground’. 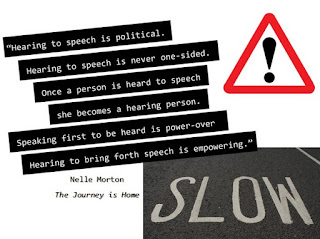 We (we the church, we the paid 'activists') are learning something similar in Hodge Hill. That the only meaningful way we’re going to address the urgent challenges is by letting go of our need to always ‘take the initiative’ and instead to seek to ‘hear to speech’ the gifts and challenges of our neighbours. And that kind of change can only ever happen slowly. But it’s a kind of slowness that has never been more urgent.

It may be only us in Hodge Hill who need to hear this from our neighbours, but maybe you do too, from the people you’re passionate about: 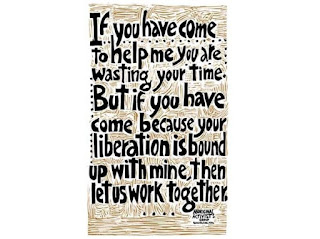 After listening (2): Philip North and the role of a bishop

So much has been written and said over the last week about the appointment of Philip North to be Bishop of Sheffield, his subsequent withdrawal, and all that happened in between. So much of it angry and bitter, polarising and dividing. And not simply, I've noticed, the usual entrenched poles and divisions. Among women and men who are passionate advocates of women's ministry at all levels of the church, there has been sadness and frustration with each other about how this recent conversation has been conducted, how we should rejoice or protest, how we might be seeking 'mutual flourishing' - and what on earth that even means.

I'm hesitant about adding to the words, the noise, the cacophony. It's taken me a week to feel ready to articulate something. I, like many others I suspect, reached a point where I 'switched off' from the debate because I had reached my personal saturation point. So I may have missed someone having said already what I want to say here. It's not a big thought. But it may just possibly be a thought that tries to nudge the conversation in a slightly different direction.

One of our basic assumptions about bishops seems to be that they must speak. They must lead through saying the right things, in the right way - whether internally, to the church, or externally, to 'the world'. And we will watch carefully what they say - or have said - and judge them accordingly. They will explain their 'position' (on any number of issues) by what they say, and we will each of us locate them on our personal ecclesiastical 'maps' by what we hear from them.

Bishop Philip has been hailed, from all 'sides' (and it seems there are many), as a powerful, prophetic voice for people and communities that have been pushed to the margins of our society. On the day of his appointment, in an address at Sheffield cathedral, he spoke strongly of wanting to be 'a bishop for all'. He had 'a number of ideas' about how he would work to 'develop and enhance women's leadership' in Sheffield diocese, but wanted to speak to them first before commenting in public, he said. I have no doubt, in the appointment process, he was asked repeatedly to give assurances on precisely this question - and quite possibly to explain, to the handful of people involved in his appointment, what those 'ideas' might be.

But what if that process had unfolded rather differently? What if one of our basic assumptions about bishops was not that they must speak, but that they must listen? And that we would judge a good bishop by the quality, care and attentiveness of her or his listening? Listening which, if it is genuine and deep, always opens the listener to the possibility that she or he might be transformed, moved, challenged and changed?

What if, to extend this thought a little further, there were to be no firm announcement of the appointment of a new bishop until the candidate preferred by the nominations panel had spent a year (yes, a whole year) travelling round their prospective diocese, engaging in 1-to-1 conversations with clergy and lay Christians, and people beyond the church too, not trying to persuade them of her or his suitability for the role, but listening to them intently and receptively? Surely, after such a sustained and careful journey of listening, the candidate should be more confident in their sense of what this particular role will demand of them. And hopefully also, the members of that diocese will have a much better sense of who this person is whom God might be calling to minister with them. But most crucially, the bishop-to-be will have opened her- or himself to be transformed, moved, challenged and changed by those encounters. And that will, if genuine, have been seen clearly by those s/he has visited. And it will also, if genuine, have actually transformed, moved, challenged and changed the bishop-to-be her- or himself. And at that point, and only then, would we invite all involved, diocese and candidate together, to ask themselves and each other whether they can hear the prompting of the Spirit to confirm this appointment.

It would be painfully slow, and hard work. It wouldn't play remotely well in the news media and on Twitter. But it might just land us with some better appointments, some better bishops, and transformed relationships between bishops, their clergy, their sister and brother Christians, and their non-Christian neighbours.

Revd Al Barrett
Firs & Bromford Estate, East Birmingham, West Midlands, United Kingdom
Since September 2010 I've been Anglican priest ('Vicar' to the rest of the world) for the parish of Hodge Hill, East Birmingham. Among other things, that means being 'present' around the place, making friends, listening lots, helping others reflect, and nurturing a church community that is committed to 'growing loving community with all our neighbours'. In 2017 I finished a PhD developing a 'radically receptive' political theology / missiology in the urban margins (now published as 'Interrupting the Church's Flow') and in 2020 I co-wrote 'Being Interrupted: Re-imagining the Church's Mission from the Outside, In' with Ruth Harley (SCM Press). I'm continuing to write, and also do bits of facilitating, speaking and listening in the wider world beyond Hodge Hill.