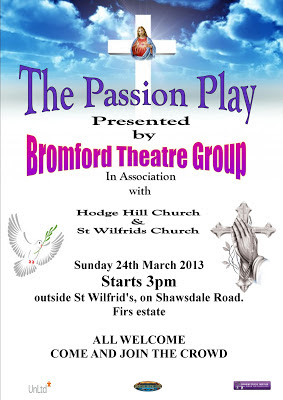 Phil Howkins is one of those people who’s very hard to say No to. His enthusiasm (and he’s got bucket-loads of it) is infectious, and you very easily find yourself getting drawn into his latest big idea. Phil was one of our ‘Unsung Heroes’ at the awards ceremony we organised a year ago. When we asked him at the time ‘if you could find 2 or 3 neighbours to join you, what would you start in your neighbourhood?’, Phil talked about his passion to start a Theatre Group on the Firs & Bromford estates. Not black tie trips into Birmingham to see Shakespeare at The Rep, but local people getting together to put on theatrical productions here, on the estate, for local people to enjoy.

With some support from our ‘Unsung Heroes’ fund, as well as some funding from Star People (which helps local entrepreneurs try out, set up and build their own businesses), Phil got a group together to put on a panto, Aladdin, in the Bromford Community Centre, just before Christmas. Our very own Paul Wright from The Hub was a very colourful genie, and Tim Evans (variously known as local Councillor and Iona’s Dad) was the sinister Abanazer. It was a great show, loads of fun, and you could tell how much many of those taking part had grown in confidence in the process.

But before the panto had even happened, Phil had started thinking about the next project. A number of us from church were in a meeting one day when Phil came out with it: ‘I want to put on a Community Passion Play’. Brilliant idea, we all said. ‘Will you join me?’ he asked. Of course we would, we said. And so just before Christmas, Phil was round my house one evening, asking me to tell him the Passion story as I saw it – and went away laden with books from my shelves, different translations and re-tellings of the gospel stories.

He did his homework over Christmas, and in January we set down again, he dictated the script, and I typed it up on my laptop. We got some funding through Near Neighbours, which has helped us pay for a real donkey, some publicity, and a film crew who will capture it on the day and turn it into a DVD to give to local schools. We began to recruit a cast (local residents from the estate, people from church, and many of us who are both). We asked the Firs & Bromford Women’s Group (mostly Muslim women, who were delighted to be asked) if they would provide food for ‘the crowd’ at ‘the Last Supper’. And we walked through the estate to find good scenes for the drama: the Jerusalem Temple (St Wilfrid’s RC Church steps), the Last Supper (a green ‘square’ just at the bottom of Berrandale Road), the Garden of Gethsemane (into the ‘wasteland’ that once had tower blocks, between Newport Road and the M6), Pilate’s Palace (a disused substation), and finally Golgotha, the place of crucifixion (just under the towering pillars of the M6 itself).

When it all comes together on Palm Sunday afternoon, Sunday 24th March, 3pm, it will probably be a bit chaotic, a bit ‘unfinished’ – but it will be full of passion, and it will be ‘earthed’ in the day-to-day reality of the place in which many of us live. It will, in other words, be ‘the Gospel according to Us’ (as a recent passion play in Port Talbot, starring Martin Sheen, was titled).

If we as a church had decided to do ‘a Community Passion Play’, we would no doubt have thrown ourselves into it, and might well have been able to persuade some of our neighbours to come along and watch. The fact that we have been invited, by one of our neighbours and friends, to become part of his ‘big idea’, to journey with him as he explores and unfolds and re-tells the story, is a gift beyond measure. With ‘Unsung Heroes’ – when we were seeking out people of compassion, generosity, trust, friendship and hope – we were deliberately trying to ‘look for what God was doing in our neighbourhood, and joining in with it’. With the Firs & Bromford Community Passion Play, we are being invited to step into our most treasured story, afresh, and to discover it living and breathing at the heart of our local community, as strangers and neighbours become friends, and God’s footsteps are followed down our street.
Posted by Revd Al Barrett at 22:47