#BromfordJesus - The Gospel According to Us

I wrote here a little while back something of the story behind our Community Passion Play, here on the Firs & Bromford estate. Well, now it's happened. In the Easter snow! On a bitterly cold, snow-covered Sunday afternoon in East Birmingham, a crowd of 50 or so brave, hardy people gathered in the warmth of St Wilfrid's Parish Hall, and after tucking into some chicken, spring rolls and biryani produced by the amazing women of Firs & Bromford Women's Group (among them a Nigerian Christian, and Iraqi, Somali and Gambian Muslims), we ventured outside to greet Jesus and his disciples, arriving with donkey, to the sound of 'The Boys are Back in Town' sung by the incredible Daz Dolczech, 'wandering minstrel' with the most powerful voice, who accompanied us along the way... 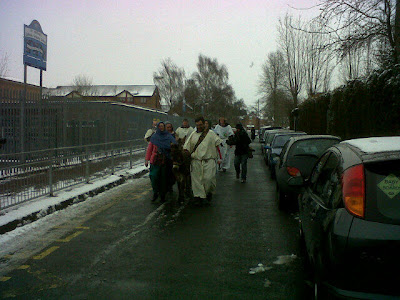 Arriving at the Temple, Jesus overturns the tables of the money-changers, sending coins scattering everywhere. In a corner, a priest collars Judas Iscariot:


Priest: you’ve been with this group for a year now – what have you found out?

Judas: he’s a good man, but he’s just not going to start a revolution. The others would fight tooth and nail to kick out the Romans, but he’s not having any of it.

Priest (grabs Judas by the ear): but now he’s challenging our authority, and the Temple itself! You know your job – keep your ears open, if you don’t want to lose them!

Jesus sends his disciples on ahead to find somewhere for the Passover meal, and off we go down the street, Daz belting out 'No you won't fool the children of the revolution...'

We turn a corner, and in front of us is a table and chairs, laid out for a meal... 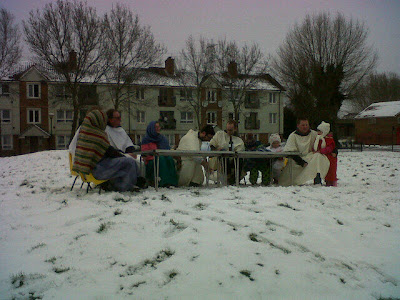 Jesus washes his friends' feet, despite their protests:


Jesus: Is it wrong to show kindness to each other? A simple thing, but a humble thing? Enough of the ‘Lords’ and ‘Masters’! I show you love. I want you to show others love.

He shares bread and wine, warns of dark times ahead, and Judas quietly slips away. As we walk on, Peter and Mary are deep in conversation:


Peter: I’ve got a bad feeling about this – all this talk of blood and denials, it’s as if he wants to die – you know him better than anyone, what’s going on, Mary?
Mary (puts hand on his arm): it’s about love, Peter – it is a revolution, but not the kind you were expecting – he’s trusting you, will you trust him?

The soundtrack slips gently from Madness' 'It Must Be Love' into Joy Division's 'Love Will Tear Us Apart', and we reach 'the wasteland' - a large piece of derelict, rubbish-strewn land in the corner of our estate, abandoned some 20 years ago after the demolition of two tower blocks, built as they were on a flood plain. Here is our Garden of Gethsemane, where Jesus and his friends go to pray, and where Judas brings the Roman soldiers. The disciples draw their swords, but Jesus is having none of it:


Jesus: No, put your swords away! Haven’t you learnt by now? This is not my way. If you live by the sword, you die by the sword.

As the soldiers take Jesus away, the disciples run in the opposite direction. The mood is getting more and more tense, as Daz's voice rings out again: 'Don't offer us legal protection / They use the law to commit crime / I dread to think what the future will bring / When we're living in gangster time.'

We may have gone our separate ways, but we all catch up with each other again, further into the wasteland, by a disused substation, taken over as Pontius Pilate's palace. Pilate - bewildered by this so-called 'king', who claims that 'my kingdom is not from this world' and 'I am my father's son... a witness to the truth' - wrestles with what 'truth' could possibly mean...

Pilate: Truth... Truth... What is truth...? The priests want you dead – do you know that? The problem I have, is that apart from the scene in the Temple, you have caused no trouble. However, the priests and the Temple provide good revenue, they keep the people in check and out of trouble. You, on the other hand, have stirred up the people, giving them hope. And that could cause me trouble. And that, you don’t want to do. Believe me...

In the crowd, one of Jesus' friends is spotted - and three times denies he even knows him... 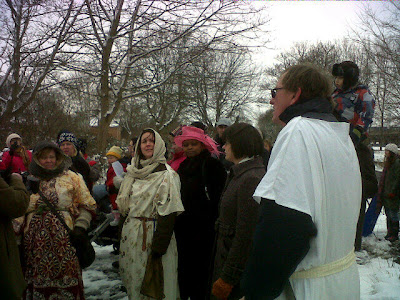 Pilate's 'idea', to release a prisoner, backfires, of course, when the crowd choose the murderer Barabbas instead of Jesus. Pilate washes his hands, pointing the finger of responsibility firmly at anyone other than himself. The Roman soldiers take over, and Jesus makes the slow journey towards the end, as Johnny Cash's 'Hurt' echoes around the wasteland... 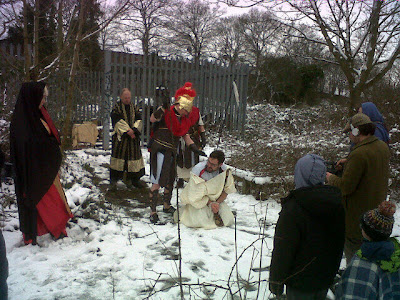 'I hurt myself today / To see if I still feel / I focus on the pain / The only thing that's real... What have I become / My sweetest friend / Everyone I know goes away / In the end... I wear this crown of thorns / Upon my liar's chair / Full of broken thoughts / I cannot repair...' 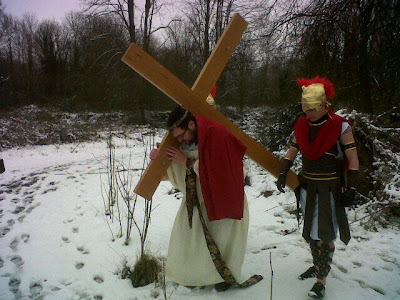 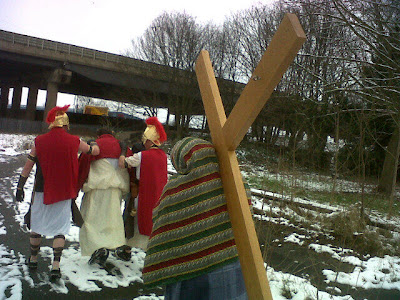 And Jesus is crucified. Underneath the towering pillars of the M6, which cuts our estate off from our neighbours, from the big Jaguar factory of Castle Bromwich that once gave employment to so many local people, from the Fort Shopping Park, just a stone's throw from some of our houses but 3 bus rides away by public transport and a good deal further out of reach when you compare the price tags with the money in many of our pockets... 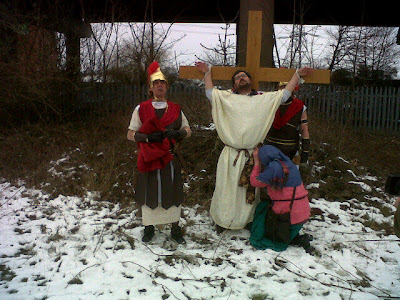 And the Roman centurion, played by Phil whose idea the play was and whose re-telling of the story we have followed, kneels in the snow and speaks to us, the crowd:

And Daz's voice, one final time, wells up with the words of Maya Angelou's defiant poem 'And still I rise' (adapted and set to music by Ben Harper):


'You may write me down in history / With your bitter twisted lies / You may trod me down in the very dirt / And still like the dust I'll rise...

Now did you want to see me broken / Bowed head and lowered eyes / Shoulders fallen down like tear drops / Weakened by my soulful cries / Does my confidence upset you / Don't you take it awful hard / Cause I walk like I've got a diamond mine / Breakin' up in my front yard...

And that was it. About 45 minutes from start to finish. But a story within which all of us involved, cast and crowd, have found a place. A story which has opened itself to being owned, translated, unfolded afresh, by a local man of deep passion and soul who can clown around as Widow Twanky or kneel in the snow and challenge us to make decisions about truth and life. A story which Phil offered back to us Christians who often imagine we have exclusive rights on it - with gracious hospitality and infectious enthusiasm for us to glimpse his vision and join him on his journey. And a story too which allowed itself to be moulded and re-strung by the landscape and histories of our estate, by our streets and squares and forgotten wasteland, by our experience of being forgotten, overlooked and let down ourselves.

And somewhere, somewhere within spitting distance of a cold crucifixion, in an abandoned wasteland underneath the thundering M6, the quiet but resilient, defiant hopes of the story, of the song, of our estate, of our hearts and those of our neighbours near and far - somewhere there those hopes met, embraced, united, and stirred. Whisper it, sing it, shout it, blog it, whatever. The crucified God is in the abandoned places and with the abandoned people. And we will rise.

[thanks to Rachel Muers for pointing out Maya Angelou as the original source of Ben Harper's song 'I will rise']
Posted by Revd Al Barrett at 22:26